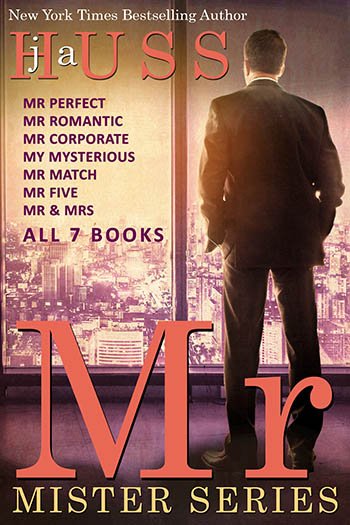 For the first time ever!


The complete seven-book set of the USA Today bestselling series is available in one download! More than 1500 paperback pages.

Mr. Perfect –Ellie is the “celebrity concierge” at Stonewall Entertainment. She’s good at it. On most days. Just… not the day her new boss, McAllister Stonewall, shows up and catches her secretly sexting in his debut executive meeting.

Mr. Romantic – Ivy is the “preacher’s daughter”. She’s desperate for a job after just graduating college when an offer comes in from the infamous Mr. Romantic. All the Misters are infamous from a media-frenzy college scandal but everyone knows Mr. Romantic was the one who “did it”.

Mr. Corporate – Victoria is self-made, super-competitive, and drowning in debt when she finds herself battling with her ex, Weston Conrad, for a job. She moved on because the two of them were never going to work. But now Weston is back and somehow he brought all her old secrets with him.

Mr. Mysterious – Cindy is a girl who goes after her dream no matter what and she set her mind on her brother’s best friend a long time ago. She does not give a crap about the best-friend’s-little-sister rule. She’s confident that Mr. Mysterious can hold his own against her brother, Mr. Match.

Mr. Match – Katya is a girl with secrets.  Meeting Oliver Shrike four years ago changed everything. Now their past is back to haunt them.  Maybe she can save him, even if she can’t save herself.

Mr. Five – Princess Rory has been in love with Five Aston her entire life. Nothing can ever come between them. Except Five thinks she’s better off without him. But Rory Shrike wants her man back. And not even the genius brain of Mr. Five will stop her.

Mr. & Mrs. – Is it the wedding of the century? Or a disaster in the making? All the Misters are gathered together on Five’s island paradise for the most outrageous wedding ever!